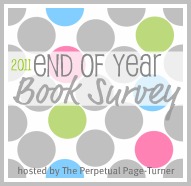 So that was Christmas!  I hope you all had a wonderful time and there was plenty of whatever it is that makes the holidays special for you :) Coming out of the food induced stupor and back into the world of blogging, I've seen this gem of a survey popping up all over, designed and kicked off by Jaime at The Perpetual Page Turner.  I am nothing if not a lover of stats and surveys so I really had no choice but to eventually join in...


1.  Best book you read in 2011?
Even though my end of the year book count will probably only just surpass 50, this is still a tough one.  The three that I just couldn't decide between were David Nicholls' One Day for just being so utterly charming and for breaking my heart a bit, Susanna Clarke's Jonathan Strange and Mr. Norrell for being so darn smart and a perfect blend of everything I love and Veronica Roth's Divergent for being totally addictive and reminding me of how great dystopian novels could be.


I've also read the first four of Gail Carriger's Parasol Protectorate series (link is to my review of the first in the series, Soulless) and they are definitely worth a mention.


2.  Most disappointing book/book you wished you loved more than you did?
This is a much easier question!  Hands down, Infernal Devices by K.W. Jeter takes this one.  I've been through a bit of a steampunk phase this year and found this on NetGalley.  It's a re-release of the book hailed as the forefather of the genre.  It is without a doubt the strangest book that I have ever read, and not in a good way...I wanted to love this as much as I love its descendants but just couldn't.


3.  Most surprising (in a good way!) book of 2011?
Bram Stoker's Dracula.  When I was a teenager, I was hopeless with horror and anything creepy.  I assumed that this extended from the teen slasher films that were all the rage at sleepovers back then to this seminal novel.  Plus, I'd already had a brush with it as a child and the memories weren't great.  Well, it turns out that I'm braver than I thought and loved this book the second time around.  A classic for a reason!


4.  Book you recommended to most people in 2011?
Also probably a tie between One Day and the Parasol Protectorate series.  To those of my friends that aren't big on the fantasy scene, it was the former.  My own copies of the latter have sat on shelves in a good few houses since I felt bad about recommending a series of five books to people without providing them.  Don't worry, they've all survived unscathed! :)


5.  Best series you discovered in 2011?
Have I mentioned the Parasol Protectorate series recently?  I have?  Ok, so that or Patrick Rothfuss' Kingkiller Chronicles.  I've only read the first (The Name of the Wind) so far but loved it and can't wait to read the next one.  Ooh, or Brent Weeks' Night Angel trilogy (link is to my review of the first in the series, The Way of Shadows) since I have a crush on the delectable Durzo Blint.  That will be one series I finish in 2012 for sure.


6.  Favourite new authors you discovered in 2011?
Gail Carriger, Brent Weeks, Patrick Rothfuss, David Nicholls, Susanna Clarke and Veronica Roth, all for different reasons.  Those mentioned above, basically.  That's not particularly creative of me, is it?  Sorry...


7.  Best book that was out of your comfort zone or was a new genre for you?
I'm usually pretty open-minded when it comes to what I read so there isn't a huge amount that is out of my comfort zone, as such.  That said, I'd count Dracula as out of my comfort zone and I loved that, so that's one.  And I've never really read a good dystopian novel before (as far as I can recall my only experience of the genre so far has been The Host by Stephenie Meyer and that was all kinds of awful) but I loved Divergent so I guess that's a new genre that I have learned can be pretty great.


8.  Most thrilling, unputdownable book of 2011?
Since I've already mentioned Divergent plenty, I'll go for And Then There Were None by Agatha Christie.  A great thriller that I read pretty much in two sittings straight and the best ending I can remember reading.


9.  Book you most anticipated in 2011?
I tend to read a few years behind the times so I'm not usually waiting on new releases.  However, I was definitely looking forward to the fourth instalment of Gail Carriger's Parasol Protectorate series, Heartless.  It was as great as the rest of the series and the last book, Timeless, will be my most anticipated book for 2012.

11.  Most memorable character in 2011?
Alexia Tarabotti from the Parasol Protectorate series.  She's smart, funny and seriously feisty.  She is one of the main reasons I just can't get enough of this series.


12.  Most beautifully written book read in 2011?
The Name of the Wind is simply stunning.  It had a mythical quality that was perfect and made the book feel completely unique.


13.  Book that had the greatest impact on you in 2011?
I think probably The Auschwitz Violin by Maria Angels Anglada.  It reminded me of everything I learnt when I visited Auschwitz-Birkenau a few years ago, that behind each great atrosity are individuals with their own lives, loves and idiosyncracies.


14.  Book you can't believe you waited UNTIL 2011 to read?
Either Dracula (again...) or Rebecca by Daphne du Maurier.  The latter was one I've had lying around for years but that I'd never been inclined to pick up.  If you have a copy in on a shelf, don't leave it there like I did. It's worth your attention, I promise.


"And to this day, when we find ourselves in the right place at the right time to assist a poor wayfarer on the path of life, a moment's pause may recall the story of good old Scrooge and good old Marley, and our hearts may be softened, we may stop to listen, and we may even offer a hand of kindness to the one who just happens, by some circumstances, to cross our path"


16.  Book that you read in 2011 that you will be most likely to re-read in 2012?
Erm...none of them.  I have read some fantastic books this year and am pretty happy that I've at least made it to a total of 50 for the year.  I very, very rarely re-read books.  I can only remember reading two books more than once in my entire life.  If I were to re-read a book this year, it would most definitely not be one of my reads from 2011.

17.  Book that had a scene in it that had you reeling and dying to talk to somebody about it?
Ooh, ooh!  And Then There Were None by Agatha Christie.  I desperately wanted to share this ending with everyone I spoke to just that they too could appreciate how brilliant it was.  I forced Boyfriend to watch the film (he doesn't read...) so that I could talk to him about it and the b***dy film had a completely different ending.  That's a rant for another time...