The Moonstone Read-Along: The Interval #readWilkie 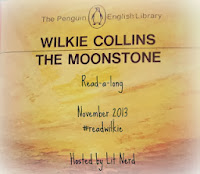 It's that time, friends.  Time to break away from The Moonstone for just long enough to scribble down why you love it before getting straight back to trying to muddle through the mystery of that Indian diamond that everybody seemed to love so much until it had been stolen.

If you haven't read The Moonstone yet, please heed this spoiler warning. This post will ramble about the first half of this TERRIFIC book and there will be minor spoilers ahead.  In a fortnight, there will be a read-along wrap up and then a few weeks (months) after that, I might get round to reviewing it "properly" and telling you all about why you should read it.  You could save yourself some time by just reading it, because it's super!  Remember, MINOR SPOILERS AHEAD!  Ok?

SO, the first half of The Moonstone sees a huge brilliant-but-for-its-flaw diamond get ruthlessly (and bloodily) stolen by a British captain (captain? I'm not sure and my copy is elsewhere so we'll stick with captain...) and brought back to England as a souvenir. Everybody thinks that the original thief is a bit of a bad egg and refuses to speak to him  while he's alive but are happy to put aside their differences on his death so that they have no real difficulty in inheriting huge ass diamonds from him.  Handy!  Miss Rachel Verinder is the lucky heiress and the fun starts with the arrival of the Moonstone in Yorkshire.

I think if anything is clear from the #readWilkie shenanigans on Twitter, everybody has a lot of love for Gabriel Betteredge.  I don't really know what I expected from Wilkie as an author but I didn't expect him to be witty and, let's go all out, funny.  I started the First Narrative a little wary.  I don't read as many classics as I feel as though I ought but every time I do read one, I realise that they aren't scary and put on Earth to make me feel stupid but can be charming and rewarding; I expected to like The Moonstone but didn't expect the laughs.  Betteredge is the kind of man that I would find offensive in real life.  The kind of man you still come across in the professional world that look sideways at women in the workplace.  And yet I find Betteredge's brand of sexism amusing...I posted some of my favourite early quotes in my introduction post and have been wry smiling and chuckling to myself over his appalling traditionalism and offensive musings on the foolishness of women ever since.  Plus, the man is wise: ""Whatever happens in a house, robbery or murder, it doesn't matter, you must have your breakfast"  His little asides and "Remember this!" warnings are adorable and I am more than a little keen to get hold of Robinson Crusoe so that I can "take a turn" myself...Who'd have thought that a cantankerous, fickle, sexist old man would turn out to be one the funniest narrators I've come across in years?!  Fine work, Wilkie.

Opinion seems to differ a bit more on the doubtlessly inestimable Drusilla Clack.  She had a tough gig, to be fair, following up Mr Betteredge's narrative but it took me a couple of chapters to get into her narrative.  For some reason, excessive piousness is more irritating to me than gender discrimination...who knew?  Now, though, I can't help but admire how clever Wilkie's writing is - mocking someone (or type of someone, I suppose) by writing from their perspective is pretty brilliant however you look at it.  Plus, the bit where irrepressible Miss Clack is creeping around stowing tracts and books in secret locations?  Hilarious. Oh, ALSO, her little jibes at Franklin Blake are spot on.

I also have a lot of love for Sergeant Cuff and was getting mighty peeved about people lamenting his actually being good at his job.  I love his pre-occupation with roses, his (reluctant?) love of Betteredge and his oh-so-cool reaction to meeting Roseanna Spearman.  More Cuff, please.

All in all, I'm just a huge fan of the first person style, the fact that the narrators are actually talking to you as the reader and the way that their perceptions colour what you get to know. I know that part of why this book is regarded as highly as it is is because of its manipulation of readers while they're being led through the story by different narrators.  We've had a peek of that in Miss Clack's grumblings about Betteredge and the differences in how they portray each other is adding a really good twist to what is already a great book.

Things I am dying to know:

1.  WHERE IS THE MOONSTONE?!  Seriously, though.  There have been a lot of pages and plenty of pointing to facts that I should remember for later but no real closing in on the blasted thing.  To be honest, I can't help but agree with Hanna, who pointed out that nobody really seems to care a great deal about actually finding it.  If somebody gave me a diamond worth £20,000 and then somebody stole it, I would not be firing the person who is trying to help me find it just because he insulted someone I liked.  I imagine that I would like £20,000 more than I like my feelings unhurt.  Just saying, Verinder family...

2.  Will anybody realise that Rachel is not very nice?  There's much loving of the impetuous Miss Verinder and I couldn't tell you why. I'm sure she is very pretty and that's nice but she also happens to be quite the madam and rather rude (although when it comes to Miss Clack, I can see why...sorry).  There are far too many people (Betteredge, I am looking at you!) that seem to think things like "She has her flaws but I'm the only one that is allowed to see them/point them out because I am able to ignore them because of  her otherwise being magnificent".  Stop being stupid.

I googled "The Moonstone" to see whether there were any film versions that I hadn't heard of and it turns out that there's a computer game version.  Because I find them quite amusing, I'll leave you with the illustrations of the main characters...

Join us in a couple of weeks for the WRAP-UP when we will all hopefully be rejoicing over the finding of the Moonstone and the general fabulousness of Mr Collins!